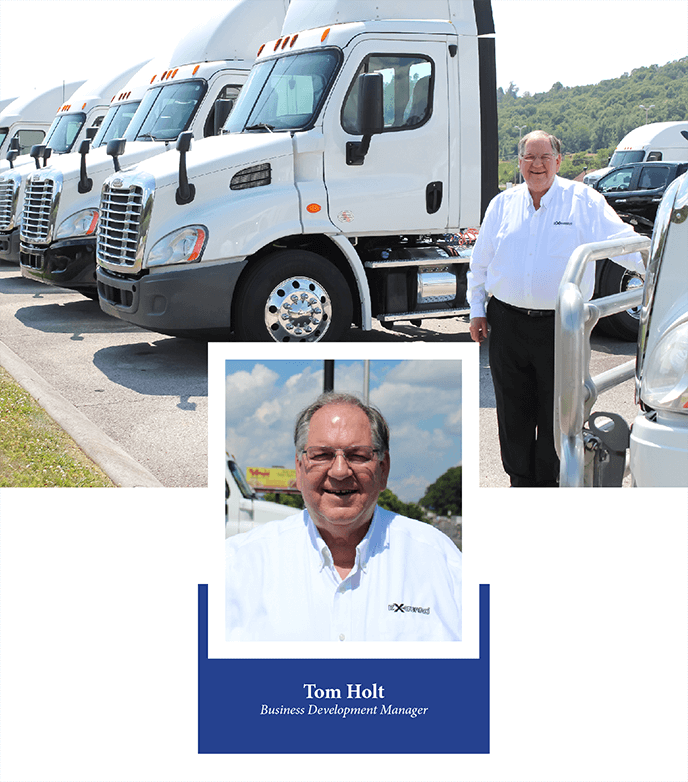 My experience in the trucking industry started Thanksgiving 2011 when I accepted a position at Ex-Guard. Talk about baptism by fire, abruptly entering an industry and sorting yourself out, this was it. Of course, my territory was a breeze, Maine to Mississippi. Once I found where I fit, I discovered that my first object would be to educate my prospects on the peace of mind and high monetary returns that justified “wearing” guards. One of my early customers, Quest Global of Cartersville Georgia, after having installed guards on over 100 of their trucks, taught me the value of our guards. James Vogler said, “These Guards [XG-150], are worth their weight in Gold.”, and not only that he proved it to me from their records. All this takes me back to my early years in selling.

In 1967 my father bought a small industrial plastics business that had been dwindling through inattention. I, at eighteen years old, and my older brother were tasked with the job of making it successful. Being just a few months out of high school and untrained in sales, I tackled the sales end of the business and started knocking on doors. Not two years later, My Uncle Sam, who with a letter in the mail, intervened into my career in 1969. I was drafted into the US Army, trained as a combat medic, after which I was assigned to an x-ray position and served in Germany. During this time I had formal leadership training, I experienced a different part of the world. Learned German and visited the place where my Grandfather was born in Switzerland. Many of the soldiers that served with me missed the value of these experiences, but for me, I’ve carried them all my life and utilized them in my career.

After two years I returned home to Tennessee and picked up where I left off in the family business. Not much had changed, I began revisiting my customers and connecting with new ones. I’m a curious person, which has helped me in understanding problems and developing solutions for customers. One big problem that a lot of our industrial clients faced occurred from acid corrosion, once I learned this, it wasn’t long before I was able to help them get a more resistant product that would outlast the pipes they were working with. Experiences like this enabled me to build an ever-widening circle of prospects and introduce them to uses of our products that would increase their efficiency and reduce their expenses. One thing I noticed in 1971, upon my return, was that customers were anxious to meet with me. This differed from the years before 1969, turning into a very successful venture that continued until 1989. Thus mounting my career of consultative selling.

I’ve taken my curiosity and creative solution thinking paired with my leadership training in the army into my career at Ex-Guard. In the same way that I was able to help my customers solve their acid wear problems, I was able to take an even stronger product and introduce it in the Eastern part of the U.S. for Ex-Guard Industries. I have had the opportunity to interact with many dealers and fleets to assist them in the decision to protect their investments, eliminate much of their accidental downtime, achieve lower operating expense and peace of mind. Having an excellent and durable product made this much easier.

I have come across some very good stories from the road such as the one at MDI, where I was shown a bent XG-125 guard that had prevented a Ford Mustang from running under the steer tire of a Freightliner Columbia traveling at 65 MPH, avoiding serious injury or even death. Another one where a driver of a Mack had rear-ended a trailer of an extremely slow-moving truck, the Mack driver’s XG-125 guard had reduced the estimated cost of repair from $75,000 to $25,000. Then there was a Freightliner Cascadia equipped with an XG-150 grille guard. The Cascadia was traveling at Interstate speed when a car pulled directly in front of it from the shoulder, the strength and design of the guard caught the car broadside, as if in a safety net, pushing it down the highway until it came to a stop, the driver and passenger of the automobile escaped with minor injuries.

I’ve dedicated my life to working with people, selling them quality products that have improved and saved their lives. Looking back, I’ve worked hard to represent the character that my father instilled in me as a young man, starting fresh out of high school first as a machinist then in sales. He was a hardworking, honest, dutiful, and resolute man. I’ve used this as a model of character in my career. Even though these may be rare qualities to find nowadays, I’ve worked to develop these character traits with my team members at Ex-Guard. We have a great team, and I’m confident they will continue to represent these values as Ex-Guard expands. What are my plans for the future? I plan on following the road wherever it takes me, enjoying the ride and the stories along the way.